Plant a tree in memory of Russ
An environmentally-friendly option 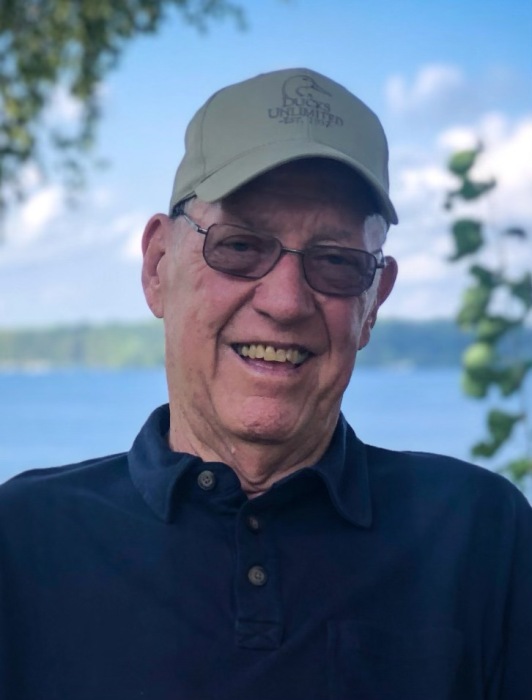 Russ Laposky passed from this life peacefully in his home near Pine River, MN, as the sun was setting on May 19, 2021. He was 88 years old.

Russ will be remembered as a man completely devoted to his wife and family, and above all else, as a man of faith. He trusted completely in the grace and mercy of his Lord and Savior, Jesus Christ, and the eternal power of the cross. He was a man devoted to prayer, who consistently lived what he believed, and was longing for his Lord to return. His family rejoices that the things he saw dimly yesterday, he now sees clearly, and the things he knew in part, he now knows in full.

Russ was born on August 6, 1932 to Louis and Thelma (Brandrup) Laposky in Webster City, IA. When he was a young boy his family moved to Iroquois, SD, where developed a strong work ethic while working the family farm. Shortly after graduation from high school, Russ proudly served his country in Korea during the Korean Conflict.

On March 6, 1955, following his discharge from the service, Russ married Eleanor Putman, who had faithfully written to him every day while he was serving in Korea.

In 1957, upon graduating from Huron College in Huron, SD, Russ accepted a teaching position in Sandstone, MN. Along with teaching science, he coached the basketball, baseball, and football teams. After seven years of teaching, he became the high school principal in Sandstone.

In 1974, Russ became the superintendent of Sioux Valley Public Schools in Volga, SD. He would later serve as superintendent of Paynesville, MN Area Schools, Northland Community Schools in Remer, MN, and Sebeka, MN Public Schools, until retiring in 1998. Throughout his career as a teacher and school administrator, Russ was known and respected as a compassionate educator who was always firm, fair and consistent with his students and employees. He improved every community he served.

Russ was preceded in death by his wife, Eleanor; his parents; and his mother-in-law, Selma. He is survived by his sister, Barb (Milo) DeJong of Cavour, SD; children: Jim (Jacquie) Laposky of Hinckley MN, Dave (Bev) Laposky of Pine River, MN, Mike Laposky of Minnetonka, MN, Lori (Ron) Lee of Edina, MN, Lisa (Darren) Vik of Spooner, WI, in addition to 14 grandchildren, and 14 great-grandchildren.

A private family service will be held at a later date. Interment will be at the Jenkins Cemetery in Jenkins, MN. Memorials to your local food shelf are preferred.

Plant a tree in memory of Russ by clicking here.
To send flowers to Russ' family, please visit our floral store.

A service summary is not available

Plant a tree in memory of Russ
An environmentally-friendly option

Plant a tree in memory of Russ

6 trees planted in memory of Russ

Fortunate to have met Russ over Christmas, immediately could tell that he loved life, his family, and most importantly, his savior Jesus Christ. He is home and all is well!
Scott and Melanie Chitwood

Russ was Mr. Laposky to me as a student. He was my teacher, and my basketball coach... And later a friend and brother in the Lord. He was a gentle, strong, soft spoken bold man of faith, and the world was a far better place because of him. Thank you Russ, I'll see you later.

Your kindness was so evident in your demeanor. You always treated students and staff equally.  You earned your trip across the rainbow bridge. Few people can equal your contribution to Sandstone High.

A great principal. A wonderful person. Our deepest sympathy to his family.

A Memorial Tree was ordered in memory of Russ Laposky by Leo and Shirley DeRungs .  Plant a Tree

I was fortunate to have been one of Russ's many students and players while at Sandstone High School.  I have often referred to Russ as one of my favorite teachers and coaches.   I have countless memories of Russ both in the classroom and as a basketball coach.   I had much respect for him.   My condolences go out to his family.    - John Konrath, Waverly, MN

Plant a tree in memory of Russ